The Origins of ‘Black Friday’

For a name that resonates with such doom and gloom, ‘Black Friday’ is supposed to kick off the most festive season of the calendar. Only in recent years have we seen retailers advertise the so called ‘Black Friday’, but why such a dark and dreary name? 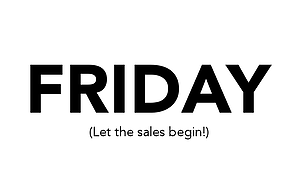 According to Wikipedia, Black Friday’s origins actually date back to at least the 1960s. Apparently, the name refers to the increased pedestrian traffic in the streets on the day after US Thanksgiving- as our neighbours to the south kick off the first shopping day of the holiday season. Theoretically, it could just as easily refer to other noticeable dark things… like the colour of my fingertips after reading the newspapers this morning- so much extra ink for all the sales on offer.

A fan of marketing history, I was lucky to witness Black Friday creep into two different countries with my own eyes – Canada and the United Kingdom. Canada’s tradition used to see hoards of shoppers cross the boarder in search of the bargains. As store opening hours in the US got earlier and earlier – some opening at midnight – Canadian retailers got wise and started running Black Friday offers themselves. Now there’s less of a run for the boarder and we can shop in our own backyard, taking advantage of great discounts almost everywhere.

Watching Black Friday take hold in England was very interesting. I moved there in 2012 and word about ‘good’ sales on the Friday following ‘American Thanksgiving’ were thin, mostly on Amazon. In 2013, the game changed. Retailers really grabbed hold of the phenomenon but there was some real confusion amongst the public with the name. Black Friday has always been known in the UK as the Friday before Christmas – when health and police services are on extra alert from all the merry-making, shopping and festive drinkers outside the pubs. Having seen that first hand, it can indeed be black and dark! While turning Black Friday into a shopping sale 4 weeks earlier was a bit counter intuitive, the Brits have definitely adapted well. Black Friday is now a week long event and there are plenty of sales to be had there too.

Like every retailer, we’ve chosen to mark Black Friday with a promotion. But while you may not need a new furnace, why not take the Black Friday name sake and let it remind you that it’s time to change your furnace filters for the winter. You should never let them get too black anyway… but given all the snow outside, changing your air filter will go well with tomorrow – a snowy-white Saturday.